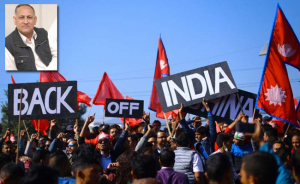 Nepal is now facing the Corona epidemic and at the same time Indian expansionism has paved the way by occupying Nepali territory. In fact, due to the incompetence and the treacherous attitudes of Nepali ruling class, India has been crossing Nepal’s border for years. Last year, India issued a new political map showing Nepal’s territory as its own region. Since then, Nepalese people are launching street protest against Indian expansionism. Meanwhile, Indian expansionism has intensified its intervention in Nepal by seizing the opportunity of the Corona epidemic. It has launched a direct attack on Nepal’s sovereignty, independence and geographical integrity, by constructing a road connecting China’s Mansarovar in the Lipulek-Kalapani, far-western region of Nepal.

The whole country is now infuriated against the naked attack of Indian expansionism. Various political parties and mass organizations have strongly condemned Indian occupation. Protest rallies have taken place every day and ‘Go Back India’ has been chanted in the streets. Protesters in Kathmandu valley and outside have burned the effigies of Prime Minister KP Sharma Oli and his Indian counterpart Narendra Modi.

In May, 2015, India and China signed a joint agreement in Beijing, deciding to use Lipulekh-Kalapani sector of Nepal, for multi-model transit hub to support their burgeoning trade. It was a direct intervention by India and China. Nepalese people opposed it strongly. In this issue, Indian expansionism and the Nepali rulers are mainly to blame, but Chinese social imperialism is no less to blame. In the context of the occupation of Limpiyadhura-Kalapani, the effigies of Indian Prime Minister Modi and Nepalese Prime Minister Oli, are burnt in the street every day. But we must keep in mind that, not only the effigies of Modi and Oli, but the effigy of Chinese President Si Jiping’s also should be burnt.

After the joint agreement by India and China, many Nepali leaders who are now in power went to China, and Chinese leaders including President Xi Jinping also visited Nepal, but neither Xi Jinping nor the Nepali authorities spoke about it. In fact, the government of CPN (CPN) led by KP Oli and Prachanda does not want to oppose the rulers of China and India. Instead, they want to stay in the chair by making ‘good understanding’ with them.

In fact, it doesn’t make sense to talk about others, even those who call themselves as the true followers of Marxism-Leninism-Maoism and dedicated to the New Democratic Revolution and Scientific Socialism also are not clear about Chinese social imperialism. It is hard to understand that, why Nepal Communist Party (Revolutionary Maoist) led by Mohan Baidhya ‘Kiran’ and CPN led by Netra Bikram Chanda ‘Biplav’ are serving the interests of the Chinese reactionary regime!

Regarding the political situation in China, the leaders of Nepal Communist Party (Revolutionary Maoist) always use ambiguous vocabularies and Biplav’s affection to the Chinese social imperialism is incomprehensible. Recently, in an interview, Biplav has strongly advocated China as a Communist country and Xi Jinping as a Communist leader. And it is a matter to note that, after departing from Mohan Baidhya, Biplav is pleading the notion of ‘post-imperialism’. In his party documents, Biplav has mentioned the terminology ‘post-imperialist America’. How can we say the imperialist center, as ‘post-imperialist America’! Really, it is a matter of surprise!

In comparison to Indian expansionism, Chinese social imperialism has done less damage to Nepal. No doubt that Indian expansionism is a major enemy for Nepal and other neighbors. India has encroached about 63,000 hectares of Nepali territory at 54 points in 21 districts adjoining India in the East, West and South, and politically it is in practice to maintain neo-colonial domination in Nepal. Almost 374 square kilometers of Nepali territory is under Indian control in Kalapani alone. Limpiadhura, Lipulekh and Kalapani are the areas encroached upon by both the neighbors-India and China.

We must be clear that, it is not the China of Mao’s period. In collaboration with India, it has occupied Nepal’s land for its own trade purpose. However, those who call themselves Maoist revolutionaries and the followers of scientific Socialism need to be clear about this issue. When chasing a wolf through one door, it is important to be aware of the fact that a tiger has entered through another door. If we are Marxists, we should not hesitate to say openly: Indian expansionism and Chinese social imperialism both are the enemies of Nepalese sovereignty! We must condemn their hegemonic position.

Chinese experts, who have specific knowledge about Nepalese history, know very well that entire Limpiyadhura region belongs to Nepal. India has made link road to China, but without the support of China, India has not built the road alone, it has all been done in collusion. China is a clever business dealer and does everything for his profit. It is known to all that, China’s main concern is Tibet and it wants to use Nepal only for its security. What is significant is that, as the Maoist revolutionaries around the world have declared, the genuine Maoist revolutionaries in Nepal also are clear–China has no longer a Communist country, it has turned into social imperialism.

People have taken to the streets even in the midst of lockdown. Especially students and the youth have taken to the streets. Huge numbers of agitators have arrested. Foreign Medias have started talking about this issue and showing the visuals of protest rallies. But China has not spoken till now, and will not speak. The truth is that Chinese social imperialism specializes in playing a secret game and we need to be clear that this game is not less dangerous than the Indians. Hypocritical behavior is more dangerous than open behavior.

Due to the pressure of Nepalese people, Oli government has issued a statement protesting Indian step. But, it is just a formality, it is not enough. It must be done in action. The neo-reactionary most corrupted government, led by KP Oli, will do nothing for the safeguarding of Nepalese sovereignty. Current situation indicates that, the nationalist forces and the oppressed people of Nepal should join hands and go ahead against the reactionary forces inside the country and abroad. In fact, now the time has come to take a new step.

Comrade Mao Zedong has said: ”Nothing is hard in this world, If you dare to scale the heights.” 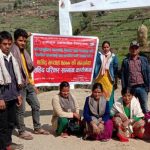 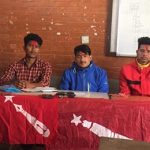 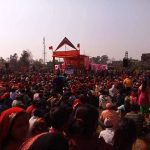